It all started when two bestfriends had a valid UK visa and wanted to elsewhere than England. They opened a map and picked a country within the boundaries: Scotland. It had 2 main cities: Glasgow and Edinburgh. BUT, visiting two ordinary European cities seemed too easy of a plan.

To spice things up a bit, they decided to attend to one of those poetical Scottish weddings with native guys playing bagpipes in kilts, of course in ancient stone buildings. They gladly accepted their challenge and made their way to Glasgow and Edinburgh, respectively.

“With a wealth of cultural attractions, world class architecture and design, fantastic shopping and a year round programme of exciting events and festivals which span the world of music, film, theatre, art and sport, it is easy to understand why Glasgow is firmly established as one of Europe’s most exciting destinations.” says our Glasgow map.

But to me, these are what it represents: difficult Glaswegian accent, failure to crash a wedding, foggy mystical weather, long walks, strong whisky.

After a plane ride from Istanbul to Edinburgh and a bus ride from Edinburgh to Glasgow, I make my way to our hotel on Sauchiehall Street. This is the shopping and entertainment street of Glasgow, you can think of it as Istiklal Street in Istanbul, Oxford Street in London, 5th Avenue in New York or Robson Street in Canada. What I’m trying to emphasise is that it’s the best neighbourhood to stay in as a visitor. My bestfriend comes from another city, so we meet at the hotel. As we fresh up and unpack, we start to mark the places we want to see on the map.

We start with a major one, Kelvingrove Art Gallery & Museum hosting modern art as well as natural history pieces. Afterwards, we head to Riverside Museum which is more fun

than the first attraction. We see countless nostalgic cars, taxis and buses; plus an ancient metro simulation! We spin by the bus pols, “pick” our wedding cars… Everything in the museum fascinate me, even though I am not that passionate about vehicles and stuff. Cold and windy, so we toss a coin and take the bus. It’s already dinner time, but we aren’t that hungry. Since we’re in Scotland, we feel the pressure of having whisky asap. Hence, we pick a whisky bar-even though neither of us actually like whisky- and order two smooth glasses with cheese platter. It wouldn’t be fair to the drink, if I say it’s a torture. Still, I cannot say it’s a pleasure to drink so. We’re exhausted from all the travelling and visiting museums, so we call it a night and get a nice sleep.

Like I said earlier, our street is an all-rounder street. So, in the morning we leave the hotel and go straight ahead towards Buchanan Galleries. On our way, we pick a nice bagel place and think about ways that we could crash a wedding. We decide search on internet if theatre and library kind of places host such organisations. We find out that The Trades Hall of Glasgow and call them to ask if they’ve a wedding for the night and find an excuse to ask the name of bride & groom as well. The person on the phone is stupidly naive and gives us the name of the duo, in addition the the reception time. There we have it! Even though it’s breakfast time, we’re soo stoked about the wedding we’re going to crash in 10 hours!

Having planned the main attraction of our visit, we gladly hit the road. We pass by Glasgow School of Art and the Glasgow Royal Concert Hall before coming to the intersection of another famous street: Buchanan Street. This one is also great for shopping and such. As we head south of the city, we see Merchant’s House of Glasgow, Glasgow Chamber of Commerce and finally Lighthouse which is apparently Scotland’s centre for design and architecture. After Glasgow City Chamber, we visit City Halls & Old Fruitmarket where we will be heading for the wedding! It’s just by the Merchant Square. We skip couple of museums along the way and find the Old Tower. Since we have a wedding to go, we call it a day and have a bite. 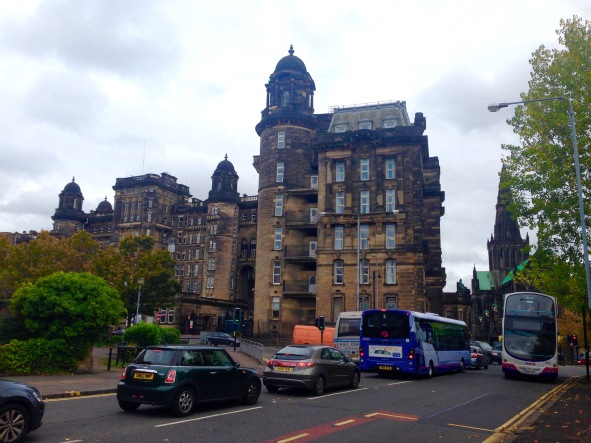 I don’t know how exciting or daring it sounds, but as we dress up we get moved by the idea over and over again! So, we take a cab to go to the ceremony. Once we get to the hall, we ask the doorman when the bride&groom will be coming. When he asks who we are and why we are asking that, we respond by saying that we’re the bride’s college roommates and we came to surprise her! The guy says that there is still an hour before everything starts. Also, not to be noticed, we have to go in after it gets crowded. Hence, we get a couple of drinks around the corner and wait for the right time. When we get tired of impatiently waiting, we decide to head back to the place. We see that dressed up people go in, so we follow them hoping we look like we belong to their group. However, o 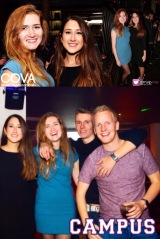 nce we pass through the door we see the bride&groom welcoming the guests personally. We look at the bride&groom, they look at us, we look at each other. This last 20 seconds feels like 25 minutes and it’s too late to back up. So we approach and say “Hii, congratulations you two!” They thank but ask what we’re doing and we respond we’re therefor their wedding. They look at each other and double-check that neither of them knows us. The doorman jumps in and says “Well, the bride&groom are surprised like you came here to do!”  We think there’s nothing left but being honest, we tell them how we have always dreamt of attending to a Scottish wedding. They don’t seem thrilled or flattered, and they say that we cannot.

Glaswegian hospitality disappoints us, yet we don’t let ourselves down and and head to the clubbing area. We kick the night off at Cova which hosts a relatively older audience than other cocktail clubs and end it at Campus which is basically a mixture of lounge and club for university students.

Next morning, we grab breakfast on our way to perhaps one of the most iconic landmarks of Glasgow: Glasgow Necropolis. It’s cold and foggy, so the best weather to visit a cemetery. We read the tombs and make up stories on our own. Before going to the Barras Market by London Road, we see the Provand’s Lordship, Glasgow Cathedral and the Barony. Both gorgeous buildings lead us to the Oldest House-which just happens to be a house afterall. We rest at Merchant City over coffee and hit the road for the market, full of expectations. We have been walking around Glasgow for about 2 days by this point, and we have never felt this insecure. I have to say that these are the least nice neighbourhoods we have seen in the city. When we reach the market, we wonder if it was worth the walk. Still, we take a tour and leave it asap. On our way back to the centre, we first stop by People’s Palace and then pass by the Old Tower to get lost between the shopping streets. 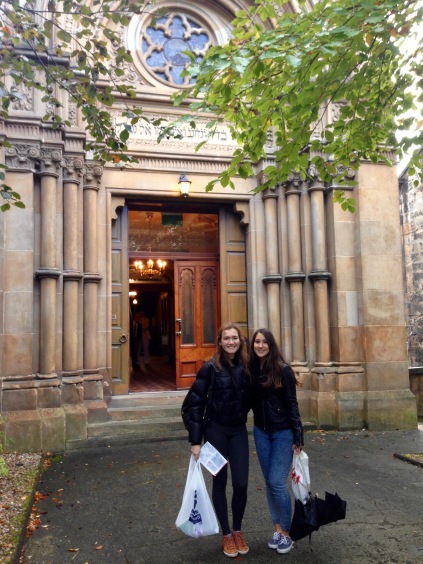 The following day, we improvise until it’s time to take our bus to Edinburgh…

Without a doubt, Scotland is a pretty awesome country to enjoy a UK visa!

Haven’t you found what you’re looking for?